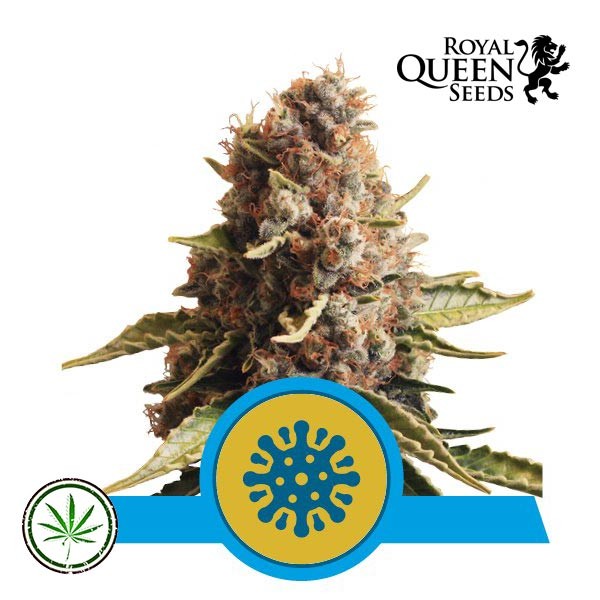 Beschreibung Features Royal Queen Seeds Evaluations 0
Beschreibung
Many users of this strain, consider the Euphoria strain of cannabis seeds to be perfect for... mehr
Menü schließen
Many users of this strain, consider the Euphoria strain of cannabis seeds to be perfect for producing a plant whose smoke is thought to be high energy, with an inclination for users of this strain to feel more social. This actually makes it great for those who experience social anxiety and is generally considered to be one of the medical cannabis strains. Euphoria is a superior blend of selective heredity between the popular cannabis strains of Royal Medic and Shark Shock. Royal Medic is a strain of cannabis that owes the majority of its genetics to the Juanita la Lagrimosa and is recognized as one of the high CBD strains and those genetics have been passed on to Euphoria. CBD is an abbreviation for cannabidiol, which is often great for combating medical conditions such as Crohn's Disease and Multiple Sclerosis. Those who suffer from medical conditions that induce pain and discomfort, often turn to strains of cannabis that are known to be higher in CBD. Euphoria inherited this high CBD and contains more CBD than it does THC but, the percentages are pretty close at 7% and 6% respectively. Euphoria's genetic background thoroughly infuses this strain of Euphoria with a sweet and particularly fruity scent that continues on into the taste for quite a pleasant smoke. Being that it is 20 percent Sativa and 80 percent Indica, there is more of a euphoric mood that does not encourage sleepiness but is great for pain and nervous tension relief. This makes for great medical weed. It is a short to average size plant reaching heights outdoors of 100 to 140 cm. With indoor heights established at 60 to 100 cm, due to the high percentage of Indica which are in general, shorter and stockier plants. The yield produced by this plant is quite nice from the Indica structure. You will time and again find indoor and outdoor yields of 400 to as much as 450 grams, per dried plant with no more than an 8 week flowering period! Not bad for medical marijuana where you might find competitor strains requiring as much as 10 weeks to flower! Critical mass might be encountered depending on your frequency of use. Be sure to browse the enormous selections at Royal Queen Seeds to find the medical cannabis seeds that produce a plant with the specific high that you need. Euphoria is certainly one of the CBD strains. These are known to produce anti-anxiety and even anti-inflammatory reactions to those who use it. This is without having to endure a heavy couched or locked down feeling that is associated with some competitor strains. Anytime levels of CBD are found to be over 4%, this is considered to be a high amount. Euphoria, contains 7% CBD.
Weiterführende Links zu "Euphoria fem"
Eigenschaften
Eigenschaften aufklappen
Menü schließen
Features of "Euphoria fem"
Royal Queen Seeds
Hersteller aufklappen
Menü schließen

Royal Queen Seeds is amongst the fastest growing cannabis seed companies in Europe. After building up many years of experience in growing cannabis seeds in the Netherlands, they decided to launch their own line of cannabis seeds and are now able to offer you quality feminized, autoflowering and medical seeds at a good price. They have a great selection of feminised, autoflowering and medical seeds for you to choose from.  Royal Queen Seeds is offering a good selection of high quality cannabis seeds at fair prices. Whether you are looking for an Indica, a Sativa or an autoflowering strain (containing Ruderalis genetics), they have something for every cannabis lover’s taste. All of their seeds are feminised, meaning you’ll have no male plants to identify and remove - so you can concentrate on raising the bud producing female plants. Their wide selection includes many Highlife Cup and the High Times Cannabis Cup award winners. Among them, classic strains like White Widow, Shining Silver Haze, Northern Light and Amnesia Haze. They also offer world famous strains such as OG Kush, Critical and Skunk #1.